Doing MBBS in Vietnam is attracting the attention of foreign medical education aspirants as a welcoming country with great weather conditions and a low cost of living. Vietnam is on its way to becoming the leading medical hub in Southeast Asia, with an increasing number of Indian communities relocating there. 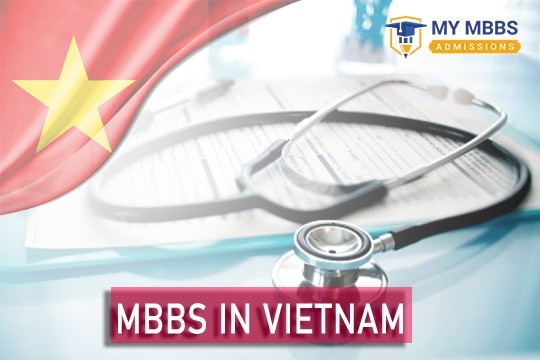 Why Should Take Admission to Study MBBS in Vietnam

To meet the high demand for healthcare professionals the Vietnamese government has enacted laws to improve the admission ability of medical university students and provide students with quality education. Getting Admission to MBBS in Vietnam is the best choice for Indian students. In Vietnam, about 20 medical universities, very affordable fees, and health science schools provide medical education for students.

Note: The fee structure may vary for the academic year

Study Medicine in Vietnam For Indian Students: For most students, studying Medicine has always been a dream which never got fulfilled. For students mostly, it is impossible to study Medicine in their own home country because of very high pre-requisites or tuition fees. Studying MBBS in Vietnam is an often chosen destination for Indian students who want to realize their dream of becoming a doctor.

No Need of Entrance Examination:

In Vietnam, there is no national examination for university admissions. The number of seats at universities has expanded as a result of recent reforms in education quality. However, as the demand for medical education grows, colleges may develop their own screening tests to attract competent candidates.

There are approximately 20 universities and schools of health sciences in Vietnam that offer medical education to students. The majority of institutions are under government administration, and student admission is handled by the university itself.

Duration for the MBBS in Vietnam

In Vietnam the duration of MBBS in Vietnam for Indian Students, there are two types of medical education. This is divided into two categories: basic and professional medical courses. The first is a 6-year medical programme, whereas the second is a 4-year programme. After passing the admission exam after graduating from high school, students can enrol in the 6-year programme. Students in the 4-year programme must first complete the 3-year medical assistant programme” and work for a period of time before enrolling in medical school to pursue the 4-year degree. The national graduation examination methodology is also being developed.

Eligibility for Study MBBS in Vietnam:

Vietnam Universities are approved by the following international agencies

Top 5 Reasons to Study MBBS in Vietnam for Indian Students

The majority of Indian medical students aspire to attend India’s premier medical schools. Unfortunately, for the majority of them, it remains a long-term goal due to the fierce competition and financial commitment required to advance their medical careers in India. If you don’t want to squander your gap years trying to pass the admission exam again, you can consider studying medicine in Vietnam. When compared to other renowned Asian countries, Forbes has listed Vietnam as one of the most cost-effective and affordable study locations for students. Vietnam is surrounded by breath-taking beauty and calm, and it provides you with the peace of mind you need to study and succeed in your career.

With all of these characteristics, here are the top five reasons why Vietnam is the finest place to study MBBS.

The majority of Indians finds the cost of living to be reasonable and within their financial means. Every University there are on-campus and off-campus dormitory facilities that provide a reasonable living space with access to Gyms, libraries, and other extra-curricular activities, all within your budget. Vietnam provides world-class amenities at a reasonable cost, which is one of the benefits for most Indians who are apprehensive to study abroad due to financial restraints.

Vietnam has been granted a ranking of 50 out of 163 countries for supporting international peace. As a result, Vietnam has significant political and economic stability, so Indian parents do not have to be concerned about their children’s safety all of the time. Vietnam is also Asia’s 9th safest country, which should reassure anyone concerned about their safety and security.

Vietnam’s GDP is comparable to that of a developed nation like Singapore. Vietnam has one of the best multi-specialty world-class health infrastructures, as evidenced by the country’s success in combating the COVID-19 outbreak without substantial casualties or a public health crisis.

Students who intend to stay in Vietnam after finishing their studies can apply for a post-study work permit. If you’re interested, you can apply for permanent residency here. Because Vietnam has a visa-on-arrival policy, students and parents do not have to worry about the inconveniences of the visa application procedure. This also allows parents to go instantly in the event of an emergency without worrying about visa processing. The flight from India takes about 4 hours, so it saves you a lot of time if you’re considering alternative study abroad possibilities.

People who are sensitive to sudden temperature variations may benefit from the ideal climatic conditions in Vietnam, which are suitable for most Indians (250 C to 350 C). There’s also no risk of getting homesick because Indian food is widely available in Vietnam. Because more than 10,000 Indian families live in Hochin, Vietnam, you will rarely miss Indian culture and events.

Admission Process to Study MBBS in Vietnam for Students

MBBS in Vietnam for Pakistani Students is One of the affordable destinations, If you have focused and strong ambitions, dreams about a career in the medical field then MBBS in VIETNAM is a best option for you. It will give you a successful career in the field of medicine line.

For doing BDS or MBBS Course in Vietnam medical college, students from Pakistan must have an excellent score in their FSC pre-medical exams. A-level students can apply, Your degrees should be properly attested. Complete documents should be presented by you at the time of the admission processing cycle.

Vietnam is one of the more cost-effective student destinations. Despite being one of the world’s fastest-growing economies, the country’s cost of living is low. It also has a vibrant culture that is practised by its welcoming residents. Vietnam is a wonderful choice for realising your ambition of becoming a doctor because it has a plethora of good medical schools. We’ll look at the best medical schools in Vietnam for international students in this article.

Vietnam has a number of medical colleges that provide high-quality education to its students. The following are some of the universities:

The university provides courses in Traditional and Preventive Medicine in addition to a 6-year Doctor of General Medicine programme. Internships are completed at the HMU hospital, a 350-bed facility that sees 5,500 surgical patients per year.

It collaborates with institutes in the United States, the United Kingdom, France, the Netherlands, Sweden, Australia, Japan, and South Korea on international training programmes, joint research, and faculty/student exchanges.

Ho Chi Minh City’s University of Medicine and Pharmacy was established in 1947. It is one of Vietnam’s leading medical schools, with its headquarters in the country’s major metropolis.

The university began as the University of Saigon’s medical school. After a few years, it was divided into three schools, which were then reformed to become the current institution. Its students were educated at the Pasteur Institute, Saigon Hospital, and the Human Body Institute until 1966. The school is presently located in the Medicine Learning Center, which features cutting-edge classrooms and instructional facilities. Internships are completed at the HCMC Medicine and Pharmacy University Hospital, which opened in 2000.

This medical school in Vietnam, located in Hanoi, provides training for long-term military doctors as well as general practise medical doctors. These are modules-based programmes that allow for quick learning and skill development. Professors are highly qualified, with 87 percent of them holding further postgraduate degrees.

The university has strict height, weight, and vision criteria for the military course. The general practise track admits around 400 students each year, while this programme only accepts 210 applications.

Hue University of Medicine and Pharmacy (Hue UMP) is a public university in Hue, Vietnam, that was founded in 1957. It was founded 50 years ago as the Hue Medical College and was given its current name 50 years later.

Hue University and the Ministry of Education and Training are both in charge of the university. Despite this, it has maintained its autonomy in terms of curriculum development. Thousands of doctors, pharmacists, and other health specialists have been produced as a result of this.

These prospective doctors are assigned to the contemporary university hospital after completing their academic training at the institution. The 700-bed medical complex, which opened in 2002, sees roughly 250,000 patients each year. They are mentored by 41 professors, including 48 physicians and 96 doctors who are pursuing additional education.

The Can Tho University of Medicine and Pharmacy (CTUMP) was founded before the Faculty of Medicine. It was established in 1979 to meet the growing need for medical education in the Mekong Delta. Until 1985, when indigenous doctors were recruited to the force, its original professors were graduates of Ho Chi Minh University and Hanoi Medical University. It was merged into its mother school, Can Tho University, in 2002.

The Faculty is well-known for its undergraduate and post-graduate medical programmes (residency, clinical specialist, and masters). The school’s 219 professors, 70 percent of whom have specialised post-graduate degrees, teach such courses.

The Hai Phong University of Medicine and Pharmacy, a public educational institution on Vietnam’s northern coast, is the next on our list of top medical schools in Vietnam. It was established in 1979 as the second facility of Hanoi Medical University (HMU) in the area. It was renamed Hai Phong Medical University seven years later, and it remained under HMU’s control. The university’s current name was given to it in 2013.

Its General Medicine curriculum, like that of other university degrees, begins with a primary medicine course. This covers knowledge of the industry and branch and acts as a foundation for further research.

The clinical curriculum is the second phase, in which students are sent to hospitals for hands-on training. The university’s teaching hospitals, which are located in Hai Phong, Hai Duong, and Quang Ninh, have a total bed capacity of 5,000.

Only Ho Chi Minh families with hukous (household registrations) were accepted up to 2016. The university now accepts students from all throughout Vietnam. The institution, which serves as a training centre for medical professionals in Ho Chi Minh, offers a General Health course to prospective doctors. The goal of this programme is to train physicians who will serve and collaborate in the community.

The Thai Binh University of Medicine and Pharmacy, located in the coastal province of Vietnam, is one of the country’s few medical schools. It was founded in 1968 as Thai Binh Medical University and changed its name to its current name in 2013.

Doctor of Preventive Medicine and Doctor of Traditional Medicine are two medical programmes offered by the university. Both degrees are six years long, with the latter having a four-year “Contact” curriculum.

Apart from local pupils, the institution also accepts candidates from Cambodia, Laos, and Mozambique, who are all neighbours.

Thai Nguyen University of Medicine and Pharmacy is the final candidate on our list of the best medical schools in Vietnam. The Thai Nguyen Medical University first opened its doors in 1968. The institution was merged into Thai Nguyen University in 1994, as a result of the 1994 integration law. Despite its numerous modifications, it has maintained a strong legacy of delivering medical education to northern Vietnamese students.

With its General and Preventive Medicine degrees, the university stays committed to its aim of producing well-qualified health practitioners. Over 15,000 physicians, 400 pharmacists, and 300 nurses have graduated from the university over the years.

By far, the university has entered into 12 bilateral partnerships with universities from China, Thailand, Taiwan, and the Netherlands. It is also quite active in research, with the university encouraging both students and staff members to submit scientific dissertations.

For more information on MBBS admissions in Vietnam and other countries visit the other Blogs of the site.