Studying MBBS in Turkey gives Indian students many universities with the best and high quality of education. Not only Indian students prefer to study MBBS from Turkey but students from around the world select Turkey for their MBBS Degree Programme because of their affordable tuition fee. Before you proceed to research about the study of MBBS in Turkey , let’s tell you more about their culture, climate and food.

Turkey is a transcontinental country and is also known as the Republic of Turkey. It is located on the Anatolian Peninsula and on the Balkan Peninsula. It is a beautiful country which is bordered by Bulgaria, Greece, Black Sea, Georgia, Armenia, Azerbaijan, Iran, Iraq, Syria, the Mediterranean Sea, and the Aegean Sea. Turkey’s capital is Ankara and it is also the largest city of the country.

Best Destinations For MBBS in Abroad: MBBS in Singapore

Turkey has four western and central regions with different climatic conditions. The Marmara Region to the northwest has moderate climate with average climate in summers and winters, ranging from 4’C to 27’C. But you can also see snow from December to March.

It’s Mediterreanean region basically has Mediterreanean climate with dry summers and moderately and rainy winters. Sunny weather stays for around 300 days of the year and the temperature could go high up to 40’C. The coast is protected from cold and northerly winds by the Taurus mountains.

The Central region of Anatolia has a continental climate because of its elevation. As you move towards the south and the east , the climate becomes cold. The rainfall in this region is sparse and happens during fall and spring. Here the summers are dry and hot with temperature averaging to 29’C. 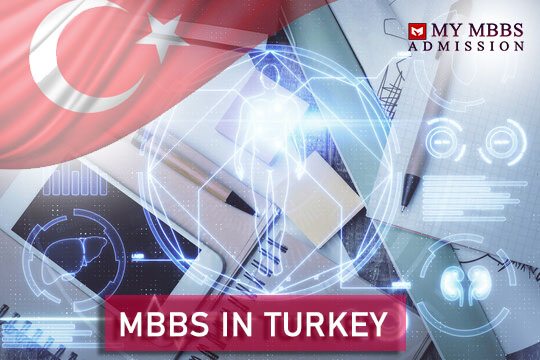 The medicine course in Turkey has a high reputation in providing medical education standards with advanced and quality teaching methods and many scientific approaches. Turkey’s Universities for MBBS are recognised by the MCI and WHO as well, Turkey’s education system is ranked 43rd number in the world.

Why Study MBBS in Turkey

You will find many reasons here for studying MBBS in Turkey which will encourage you to decide on Turkey for an MBBS Degree.

In Turkey the MBBS degree is offered in English language. The MBBS Universities in Turkey give medical degrees in many different reputed disciplines.

The benefits to study MBBS in Turkey are :

Study Medicine in Turkey For Indian Students: For most students, studying Medicine has always been a dream which never got fulfilled.  For students mostly, it is impossible to study Medicine in their own home country because of very high pre-requisites or tuition fees. Studying MBBS in Turkey is an often chosen destination for Indian students who want to realize their dream of becoming a doctor.

You can study MBBS In Turkey either in English or Turkish. These MBBS Universities are located in Istanbul, Ankara, or İzmir, hence the students have lots of options to choose from.

The MBBS course in Turkey may different from other university. hence, here below the student can get an overall outlook about MBBS fees structured in Turkey. The medical degree of studying mbbs in Turkey University cost of mbbs in turkey around 15,000$ – 30,900$ for private Medical colleges in Turkey. By filling out our application structure the candidate will straightforwardly benefit from the decreased yearly expenses and scholarship program!

Here is the list of all medical universities in turkey for Indian,  Kashmiri, and Pakistani students offering Medicine in Turkey in English. To apply to the universities mentioned below, please fill out the application form.

The Eligibility Criteria to study MBBS in Turkey

The Study structure of MBBS Degree in Turkey are as follows:

Whilst studying MBBS in Turkey you will come across many international patients in the hospital because Turkey is known to be the country of Medical Tourism. So there will be a lot of patients visiting Turkey to get treatments for Cancer, Cosmetic Surgery and many more. This gives every student who plans to study MBBS in Turkey a lot of hands-on practice in several kinds of diseases.

You will find patients from different sides of the globe,  like Iran, Asia, Russia, Europe, Saudi Arabia and UAE. Hence, Universities in Turkey for MBBS encourage the international students to learn the local language too,to be able to interact with patients during their internship.

One of the best destinations MBBS in Turkey For Pakistani Students 2021, If you have strong ambitions and focused dreams about a career in medicine then MBBS in Turkey is a good option for you. It will give you a successful career in the field of medicine.

For doing BDS or MBBS in Turkey medical college, students from Pakistan must have an excellent score in their FSC pre-medical exams. A-level students can apply, Your degrees should be properly attested. Complete documents should be presented by you at the time of the admission processing cycle.

Yes, Doing MBBS in Turkey is one of the safest and good countries for Indian students:

Tuition fees of MBBS (M.D) in Turkey for International Students

Tuition fees of Dentistry in Turkey for International Students

The monthly cost of living in Ankara

The monthly cost of living in Istanbul

The monthly cost of living in Famagusta

There are many reasons to pick Turkey as your medical study abroad destination, but the primary factor would be the inexpensive tuition fees for MD/MBBS and related programs.